Tent vs. Hammock: Dispelling the Myths 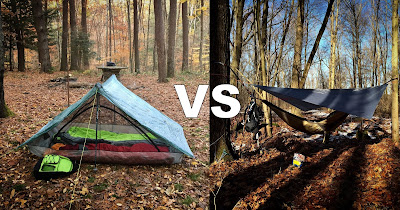 Shortly after I got into running, the book Born to Run was released. If you haven't read it, it's a compelling story about the Tarahumara Indians - a tribe of people with deeply cultural ties to endurance running. After talking about the Indians for some time the book goes on to recount the story of how one of their athletes defeated legendary ultramarathoner, Scott Jurek in a footrace. The book was a top seller and spawned a barefoot running movement. Barefoot running became a subculture, dare I say a counterculture, within the running community. There were a lot of reasons people used to justify why everyone should take up barefoot running (many of them mythical) and barefoot runners were often viewed as condescending and snobbish by their more traditional running mates. As time went on, many runners who switched to barefoot running suffered preventable foot injuries, Vibram was sued for making unsubstantiated claims about the benefits of using their "barefoot" shoes, and runners in general started moving to shoes with more cushioning rather than less.

When I got into backpacking, I started to see the same sort of trend with hammock camping. (If you are a diehard hammock camper, don't stop reading yet!!) It is not uncommon to hear hammockers make statements like, "I'll never sleep in a tent again" or refer to tent or tarp campers as "ground dwellers." And I've heard all kinds of reasons as to why nobody should ever sleep on the ground. Now, I'm not saying that hammock camping is going to fade away. But if you look objectively at many of the "reasonings" why hammock camping is better that ground camping, you will find that they are often as mythical as the majority of the so-called "benefits" to barefoot running. That's why with little more than a handful of hammock camping trips and a lot of YouTube videos about hammock camping under my belt, I feel prepared to tackle the Tent vs Hammock debate.

First, let me say that I find hammock camping quite enjoyable. Though I have not and probably will not ever choose to use hammocks exclusively, I do recommend that most people give it a try. That being said, there is a lot to know before you venture off into the woods with a hammock, if you want to have a positive experience. I recommend checking out Shug's YouTube channel for all your hammock camping education needs. Shug is a diehard hammocker with just about every type of hammock and accessory you can imagine. I think you will find him both informative and entertaining.

Now, back to the Tent/Hammock debate. Below are a few of the common statements many hammockers make regarding the benefits of hammock camping over tent/tarp camping. I will follow them by a True/False/Sometimes response and an explanation of why I agree or disagree with the statement.

Hammocks are faster and easier to set up than tents: Sometimes

There can be truth to this statement. If you arrive at a campsite and there are two trees perfectly spaced, without dangerous limbs hanging over head, AND there isn't a suitable place for a tent or tarp, the hammock is definitely going to be faster and easier. That being said, it usually takes some time to find the right spot to set up your hammock, just like it takes time to find the right spot to set up a tent. Additionally, if you are camping in a place without an abundance of trees, like a desert or mountain ridge, hammock camping (while often not impossible) is far more complicated and time consuming than tarp/tent camping. The truth is, most campsites are chosen with care, regardless of which type of shelter system you choose. In my experience, ease and speed of setup varies greatly between location, equipment, and individual campers.

Maybe this one should be a "sometimes" as well. Compared to an entry level backpacking tent, hammock camping is definitely the lighter option. But Hammocks generally require a tarp to ward of wind, rain, and snow. Choosing to use a tarp alone, is obviously the most lightweight option as a single tarp will always weigh less than the same tarp coupled with a hammock. Plus there are tarp-tents style shelters like the Zpacks Duplex or the Tarptent MoTrail that weigh just slightly more than a comparable tarp alone and can be shared (gathered end hammocks, even the big double hammocks cannot be shared comfortably all night long) cutting the weight-to-person ratio even more. Another consideration is that most hammock campers choose to use an underquilt/topquilt system to keep warm at night rather than the topquilt/sleeping pad system adopted by more conventional backpackers. Good underquilts like the Hammock Gear Incubator, while very light weight and compressible, easily weigh more (and cost MUCH more) than a good lightweight sleeping pad like the Therm-a-rest NeoAir Xlite (which can also be used in a hammock but is not as comfortable).

There is no denying that there are certainly some luxury aspects to hammock camping. For instance, a hammock is a much more comfortable place to sit and relax than a log or rock. Also, it's nice to put on or take off your shoes while seated in the "chair" position. I have also heard that some back and side sleepers don't experience the same aches and pains after a night of sleeping in a hammock that they do on the ground. That being said, due to the convection process that takes place when you are suspended in the air, hammocks can be more difficult to stay warm in. And you cannot lay completely flat in a hammock. Even in an asymmetrically sewn hammock like the Warbonnet Blackbird you don't lay completely flat. This simple detail means that hammock camping is essentially backcountry purgatory for most stomach sleepers. So, about 10% of people will not find hammock camping more comfortable than "ground dwelling" under just about any circumstance.

When I'm planning a trip, I decide between a hammock and a tent by looking at each trip individually. The convection process I mentioned before that can make it hard to stay warm on a cool, windy night, is also an amazing feeling on a hot summer night. If it's going to be cold, or there is a chance that there won't be enough trees to hang my hammock close to the people I'm camping with, I will almost always opt for the tent. If it's going to be a low mileage trip and there is going to be a lot of time spent hanging out at camp, I am more likely to bring my hammock so that it's available to relax in. If Chanda or one of the kids will be joining me, or weight is a concern, I will bring the tent so that we can share a single shelter. For me, there is no best system for every scenario.

If you are kicking around the idea of trying out a hammock in the backcountry, I hope this post was informative. I definitely recommend giving it a shot to see if it is a good system for you. If you are a diehard tent, tarp, or hammock camper, I hope that this post enticed you to consider switching it up once in a while. There is merit to every system. In my opinion, there is a time and place for every system as well. If for some reason it came to where I had to choose just one, I would go with a tarp-tent design but I would be sad about never getting to stretch out in a hammock after a long day of hiking again.

On a side note: Check out the products I linked in this post. Everything linked is quality equipment. These companies are small businesses that hand build their products in the USA and are run by people who love backpacking too!