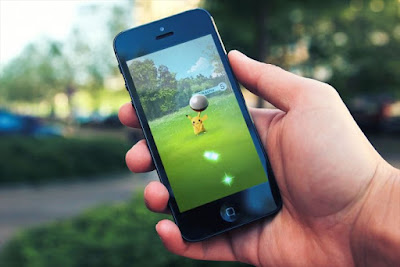 "I'm so sick of that game" I overheard the gas station attended blurt to her coworker. "I go into the woods for a peaceful, quiet workout and the park is full of losers being loud and looking for fictitious monsters!"

It's a sentiment that seems to be pervading the internet. Like the original Pokémon games of the 1990's this cultural phenomenon known as Pokémon GO has stirred up quite a bit of controversy. But there's a different tone to it this time. Instead of complaining about an entire generation never leaving their bedrooms, the complaints seem to be centered around an entire generation getting out of the house, invading our communities and even... (wait for it) going for walks in the woods! *shudder!*

Every time I hear someone complaining about this game I just want to shout, "Are we serious right now?!?! We're complaining about kids getting exercise?" But the attendants comments got me thinking... Where were these complaints when Nintendo launched the Wii and then the Wii Fit? I don't seem to remember hearing anyone complain that kids (and adults) who were previously living sedentary lives in front of a television screen, are now moving their bodies more. As a matter of fact, that seems to be one of the praises I remember being sung about the new game machine. And those praises continued to be sung about subsequent systems, like the Xbox 360 that used even more advanced technology, allowing a greater freedom of motion as remotes became unnecessary. So, why are we so upset about this new generation of video game?

It seems to me that what people are upset about is that Pokémon GO takes kids outdoors. A whole generation of teens and young adults are invading the places we love. They're going for walks in the woods, they're visiting monuments, libraries, museums and other points of interest in our community, many for the first time in their lives. The places that we have cherished are no longer as quiet and secluded as they once were. But isn't that what we want?

As an ultra marathoner and outdoor enthusiast, much of my social media is dedicated to sharing my adventures with the hope of inspiring others to get out there and experience the beauty of nature themselves. Many of my friends do the same thing. We share our adventures so that others will be inspired to have a few of their own, to get fit, or just to get outside more. But when something actually manages to get people out there en masse, we complain about it. Some of the complaints might have some validity. Others... I'm not so sure about. Here are the three most common complaints I've heard, and what I think we can or should do about it.

The places I go for peace and quiet are now crowded with young people!

Isn't that what you want? Sharing things we love with younger generations ensures that they continue to be appreciated. Additionally, parks exist for people to visit them. If people don't go to them, then they aren't worth the cost of upkeep. This surge of visitors to your favorite park or monument likely means that your local government will continue to fund it's existence when budget revisions come around. And lets face it, it's not THAT crowded. A few people walking up to look over the same pond you admire on a regular basis isn't really that big of a deal. And if it is, keep in mind that most parks have a few places that people rarely visit. Maybe it's time to find a new spot if you need more seclusion.

They're always looking at their phone. They're missing the beauty that surrounds them.

This is the same tired old argument that hikers have said about runners forever. I can't tell you how many times that I've heard hikers complain that I can't possibly enjoy the woods moving so fast. It's ridiculous. I love to hike and backpack as well. I am fully aware of the difference in experiences and I realize that I might not see as many small details while running but that doesn't mean that there's a better place for me to run. I still see more than I would have had I decided to stay at home and run on the treadmill. And, things still catch my eye that cause me to pause and take in the scenery. The same is true for kids hunting imaginary monsters on their phones. Yesterday on my run, I saw two teens holding their phones, looking up at the trees in search of a woodpecker that they could hear but not see. I watched a girl, looking at her phone, walk up to a bench near a pond, sit down, and admire the view. And I saw an overweight father and daughter walking down the road together in search of tiny monsters. There is a solid chance that none of these things would have taken place, had these people not been playing a video game on their phones.

They don't know trail etiquette. They're loud and take up the whole trail. 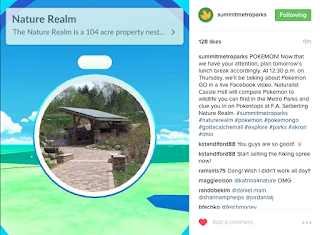 We weren't born knowing trail etiquette. Someone had to teach us. Someone has to teach them. Instead of complaining, how about kindly offering some instruction. For example, politely say, "passing on your left" instead of just yelling "on your left." It may take some time but eventually they'll catch on. Even better, slow down and ask them about the game, inquire about what they have caught, tell them what wildlife that you've seen, and then slip in that if they are quiet, they may see the same wildlife. Also, keep an eye out for things that you're local parks might be doing that do the same thing.

Pokémon GO is an opportunity for us to engage an entire generation in the outdoors. Instead of fighting it, lets embrace it. Lets look at the positives. And then, lets encourage these teens and young adults to look up from their phones for a minute to admire the places they're visiting for the first time.