What Now? (Thoughts After My First Marathon)

It's been 48 hours since the completion of my first full marathon. I took yesterday and today off of work and aside from my joints & muscles being a little more achy and sluggish than usual, I feel pretty recovered.

Having decompressed from the race I am faced with the question, "What Now?" Do I train for another marathon, working on speed or picking an easier course for an almost certain PR? I do love speed work! Or maybe keep building on the distance base I have & train for a 50K or 50 miler? After all, long runs where I spend hours in the woods have recently become one of my favorite parts of the training week.

Nothing is set in stone quite yet. After all, I won't even start running again for another week or so but there are a few things that are certain.

Some Changes Here at Home

You may have noticed a change in focus in Chanda's posts from running to martial arts. About a year ago our oldest son started taking martial arts. After sitting in the gym watching him for about six months Chanda decided that rather than just sitting there watching she might as well start taking class with him. At the very least it would be good cross training. Turns out that she absolutely LOVES it! Rather than being good cross training martial arts has become her primary training. Together they are working hard and, at this time, they both intend to see it through to their black belts! That being said, the focus of our blog will officially be changing from strictly running-centric to more fitness-centric. I will still approach the blog from a runner's perspective and Chanda will approach the blog from a martial artist's perspective. We feel with this change we will be able to offer a more well rounded perspective and hopefully inspire more people to pursue a healthier more active lifestyle! 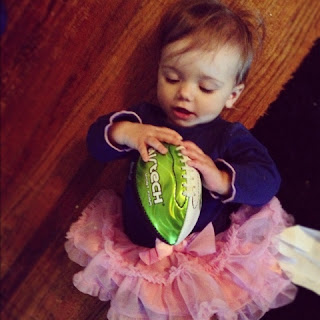 Additionally, in August we brought home baby number seven. You read that correctly, baby number SEVEN! She was an unexpected surprise and we are thrilled to have her! Amidst all the chaos of unexpectedly bringing home a seventh child we somehow neglected to announce the good news. So, today we'd like to officially announce the arrival of baby Hope!

We are looking forward to all the things that are in store for us in the coming weeks, months and years! Running, martial arts, food, fitness, parenting...it's going to be a blast! We hope you will enjoy this new direction as much as we do! Remember, today is simultaneously the oldest you have ever been and the youngest you will ever be again. You will never be as young again as you are today so, until next time, train hard, eat right and live life to the fullest!

Email ThisBlogThis!Share to TwitterShare to FacebookShare to Pinterest
Labels: Running