Finding Inspiration at The Towpath

This weekend was by far the most inspirational weekend of my life with regards to running. Not because of Sunday's Chicago Marathon, seeing pictures of the 45,000 runners who towed the line or reading about Moses Mosop's record setting victory. Not because of Craig Alexander's record crushing 8:03.56 performance at the Kona Ironman. Not because of some human interest story I read about a high school cross country runner who stopped racing to help an injured runner off the track and still went on to win the race. While all those performances are truly inspiring, I found myself in awe of the truly great performances I witnessed firsthand yesterday at a small local race, on an eight foot wide trail. I found more running inspiration than I had ever dreamed at the Towpath Marathon.

Let me begin by saying that I am no Marathoner. It's true that I have run in three marathons but I have never completed 26.2 miles. My marathon experiences are limited to crewing, running the half or participating as a member of a relay team. Oh, But I do love a good marathon and this weekend's Towpath Marathon was no exception!

I loved seeing tweep and local blogger Greg Strosaker (www.predawnrunner.com) take first place, not in his age group but in the entire race. His dedication to balancing high mileage training, a family, a job, and a blog are truly an inspiration! I was inspired by watching family friend, Bill Moman PR by nearly thirty minutes, not by training harder (He never ran more than five or six miles at a time all season) but as a result of a new found dedication to improving his overall health & fitness level. But even more inspiring were the less glorious performances I witnessed yesterday.

After I had completed my race I set myself up at the aid station around mile seventeen to crew for Chanda and a close family friend. While I was waiting I occupied much of my time by cheering on other runners. After a break in the action at this aid station I heard the crew leader tell the teenage volunteers, "Alright girls, let's cheer for the next person who comes through like they are the leader of this race." After sometime they spotted him in the distance. Cowbells, whistles and shouts of encouragement filled the air! But he was moving slowly. As he drew closer you could see that he was accompanied by a race volunteer in a safety green reflective vest. The runner's face was red and he barely picked his feet up off the ground as he walked. His wife and small daughter stepped onto the trail. You could see the concern on her face. As he approached the volunteers handed him two cups of Gatorade. He walked up to his wife and took a drink as the volunteer explained the situation. I could not hear much but I gathered that he had gone down on the trail. After finishing his Gatorade and refilling his water bottle, to my suprise he headed back out onto the trail, spurred on by cowbells and whistles, and the hugs of his wife and daughter.

Shortly after that, Chanda and our friend Rebecca came into the aid station. As I refilled water bottles and handed out Cliff bars and pain meds Chanda told me how her IT bands had started hurting at mile two. I could see in her eyes that she was in tremendous pain but she looked like she was moving well. I asked if she was going to keep going and she said yes. Rebecca vowed to see Chanda finish and promised that she would not leave her until they had crossed the finish line. I promised to meet them again at the aid station at mile twenty two and watched them take off down the trail together. I packed up my duffel bag and headed to the aid station.

When Chanda and Rebecca arrived at mile twenty two they seemed to be in excellent spirits. They grabbed some Gatorade and I joined them on the trail for a minute. When I asked how she was feeling, Chanda looked at me, tears in her eyes and said, "I can barely bend my knees." Secretly I wanted to offer her a ride but I was afraid that if I did she would take it and regret going twenty two miles and then quitting. Instead I wished her well, said I would see her at the finish line and watched her, barely able to walk, as she tried to run down the trail.

At the finish line I worried and waited and then I worried some more. Finally, I saw them in the distance! They were running strong! I raced to the finish line to take a picture of them crossing together! She had done it! She had pushed through twenty four miles of pain to conquer the marathon once again. After receiving their finishing medals Chanda told me how Rebecca had given up her own time goals and instead set a new goal of seeing Chanda through no matter what it took.

I learned a lot yesterday. I learned that running can be selfless. I learned that sometimes, just seeing something through, no matter how much it hurts, is more important than any time goal or PR. I saw first hand how empowering an encouraging word from a spouse, a child, a friend and even a total stranger can be. And I walked away from that race more inspired to run, to love, to support and to finish what I start than I would have ever dreamed. Yesterday, I found my inspiration at the Towpath Marathon. 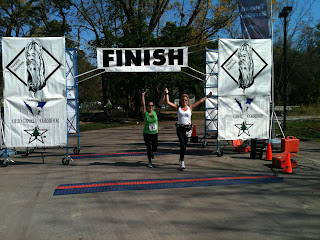