Recently I took our youngest daughter Cole to her nine month well-baby visit at the pediatrician. Prior to the appointment I was told by the front desk that we would be seeing the nurse practitioner rather than the doctor this time. No big deal. All they're going to do is weigh her, ask us some questions about her development, give her any shots she needs and we'll be on our way. She's a perfectly healthy, on target, roly poly little girl. When the nurse walked into the room I shuddered. It was the same nurse practitioner that had been at our old pediatrician's office. The one that told us for months that there was nothing wrong with out youngest son James (Who it turns out is extremely asthmatic!). And then, when we finally convinced her otherwise she called an ambulance and had him rushed to the hospital against our wishes! The nurse we had switched doctors to get away from had followed us!

"How is she doing?" She said cheerfully.

"Great!" I replied. Trying to mask my disappointment. She began looking at the charts.

"Oh my! It appears that Cole has lost almost an entire pound since her last visit." This did not surprise me. Cole is more active than ever. At nine months old, Cole crawls everywhere. She has started pulling herself up on anything she can and she has decided that she doesn't want to be fed but would prefer to put food into her own mouth....all by herself. Any parent who has been through this stage with their children knows that nine month old babies are not the most proficient at feeding themselves. This combined with her new found mobility almost guarantees some weight loss. "What do you feed her?"

I went on to rattle of a list of the various fruits, vegetables and grains that we might feed her on any given day and mentioned that she typically eats whatever we're eating.

"But what do you do for protein?" I explained that there is protein in many of the vegetables, beans and grains that we feed her. Not to mention that there is plenty of protein in her formula. "What about meat?"

I just stared at her. Dumbfounded. "She's a baby..." was all I could muster. I didn't want to get into the fact that we are plant strong runners who rarely even have meat in our house let alone feed it to our baby. 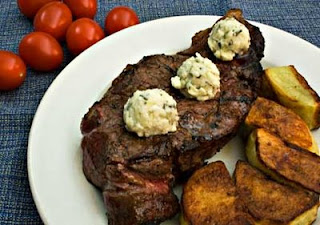 "Well she needs meat. ...and butter." I stared blankly. "I want you to add butter to all those vegetables that you're feeding her. And the next time you have pork chops... Throw one of them into the blender. Add butter and some formula and blend it down into mush and give her that." I just stared some more. "You know what? I'm going to go see if the dietitian is available. I'm sure she has some great tips for you as well." She walked out of the examination room and closed the door behind her.


Nurse just told me that Cole needs meat. Lol! She acted as if that is the only protein source in the world. "baby w/2 teeth, have a steak!"

I began preparing myself for a lecture. Who pushes meat on babies anyway? And pork? What if I were jewish?!?

Soon the nurse practitioner and the dietitian walked in together. "So, she's lost a pound since her last visit. I already told him that they need to add meat and butter into her diet. I told him to throw a pork chop into the blender with butter and formula and give her that." The dietitians eyes got wider with every word the nurse spoke but she remained silent. "I was hoping that you would have some more ideas for him. I'll leave you guys to talk." And with that she walked out of the room.

The dietitian was very nice. She introduced herself and then began asking the same questions the nurse had. "What do you feed her?" Again I rattled off the same list of various fruits, vegetables and grains that I had listed to the nurse. To my surprise she did not ask the meat question. "I think you feed her perfectly" she replied. "She obviously is just getting more active and needs more calories. Lets just try adding another scoop of formula to her bottles and that should give her the extra calories she needs. If she continues to loose weight then we can look at other options but I think the extra powder will do the trick."

I felt vindicated! Our plant strong diet was "perfect"! The dietitian shared our opinion that meat and butter are NOT the building blocks of good nutrition and we were doing the right thing by feeding our kids foods that grow up from the ground. She never asked if we were vegetarians or vegans. Never tried to label or categorize us. Never asked how we got protein. It was clear that we are healthy active people, lacking in nothing nutritionally and with that she sent us on our way.