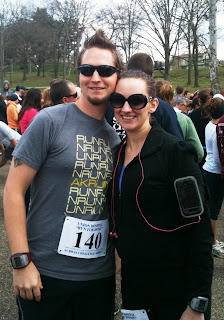 Is it true that some lessons are best learned the hard way? I don't think so. I often tell the kids in my church to listen to their parents because lessons learned the hard way aren't learned better they just hurt more. On Sunday Chanda and I both ran our first half marathon. (Yes, Chanda has run a full marathon but never the half. I guess she kinda skipped that step!) Going into this race Chanda and I had very different goals. Chanda wanted to celebrate the end of being a "tax widow", have fun and, most importantly, finish the race pain free, indicating that she is ready to begin marathon training. Me? I wanted to see how fast I could do it! And having never run a half before, I set what I considered a pretty ambitious time goal. Now, I feel that we are both pretty well read runners but as we were pressing toward the finish line we both realized that booksmart doesn't get you to your goal and being "newbie" half marathoners we had some lessons to learn. Lessons that you don't learn on the treadmill. Lessons that you can't know until you've raced. These are the things we learned on the street!

Lesson #1  Training is Training.
I'm sure you've read about the importance of training in the morning. It probably went something like this, "Recent studies have shown that the human body naturally performs at its best in the afternoon but you can train your body to perform well anytime simply by doing the bulk of your training that time of day. If your race will be run in the morning you can train your body to perform well in the morning by getting up earlier and training before school, work, etc." It's a pretty widespread and highly accepted theory. It's in just about every running magazine and running blog out there. You have to train when you race! I've even seen timelines showing how you should go to bed at 9:30 and get up at 5am to train!

Here's my problem with that theory. WHO RACES AT 5:30AM? I mean...SERIOUSLY?!? Now, I know there are a few races out there that start in the wee hours of the morning but around here most races start between the hours of 7 and 9am. That poses a problem for just about anyone who has school, a family or a job. Let alone all three! Using that theory we should all be logging miles at the same time as we are eating breakfast, getting our kids dressed, getting ourselves ready for work, packing lunches, making sure the kids brushed their teeth & hair, loading them into the car, rushing them off to school, carpooling and drinking our first cup of coffee at work. That sounds feasible! What I realized is simple. Training is training. It doesn't matter if you do it at 5am or 11pm as long as you do it. On race day you will reap the rewards of your hard work regardless of what time your alarm clock goes off every morning.


Lesson #2  Practice Fueling
This one is pretty easily overlooked but extremely important! Long runs leading up to race day are the time to experiment with proper fueling. Race day...not so much. While training Chanda and I both fueled the same for long runs. Between 45 and 60 minutes into our run, regardless of distance we would eat most of (or in my case all of) a cliff bar and then switch from water to a sports drink. The day before our race while I was freaking out about how I was going to carry a cliff bar in my pocketless running shorts Chanda was picking up some Gu packs from a vendor at the expo.  And on race day when I was cutting my cliff bar into long skinny pieces and shoving them into sandwich baggies so they would fit into the tiny pocket on my water bottle, Chanda was simply slipping those Gu packs into the pocket on her water bottle. She seemed so smart, so cool. She had it all figured out. But at mile nine when I was still plugging along Chanda was feeling light headed and dizzy. "I should have fueled better" she said after the race. Don't make that mistake. Figure out what works for you and stick with it. Practice fueling. It is a vital part of a successful race.

Lesson #3  Know the Course
I thought I knew this course. I looked at the course map then compared it to an elevation map of the area. It was mostly flat. A few steady inclines. Two big hills and one big descent. I thought that I had trained properly. I used a local trail with some good inclines, one of the hills even had a 5% incline warning at the bottom of it. I should have been running steps somewhere. Today, I got on my treadmill and cranked the incline all the way up. 10%. That second hill, the one at mile nine seemed steeper than even that! (To be fair I was pretty tired but I bet it was close!)

Know your course. If it's a fairly local race get a copy of the course map and go out and drive it. If you come to a big hill. Park your car and walk it. Get an idea of how it feels under your feet. Once you've done that you'll be able to modify your workouts. You'll know if your doing enough hill training and you'll be able to approach the race with added confidence of knowing that you are well prepared and that there will be no surprises on that course.

Lesson #4  Set Multiple Goals
As I mentioned earlier Chanda and I had two VERY different goals. Chanda, who ran a marathon in the fall with an IT band injury just wanted to have fun and finish pain free. For her it was a celebration of tax season ending and running season beginning. (for those of you who don't know us I manage a tax prep service during the winter months). Her plan was flexible. I on the other hand had one goal. To finish in under 2 hours. That is what I trained for. That was the plan and I was sticking to it. But there was one very big factor that I had not considered. The wind.

The National weather service recorded a steady wind of 25mph with gusts reaching 39mph. Unfortunately, unlike at today's Boston Marathon that wind was NEVER at our backs. About 40% of the time it was a crosswind and the remaining 60% a headwind. Do you know what it's like to run into a 40mph headwind? And when one of those "gusts" hit you from the side...well, lets just say that one sent Chanda careening into the runner beside her. How a loop course had us running into a headwind both ways is still something I cannot figure out! But needless to say running that race required considerably more energy than I had expected.

At the eleven mile mark I was out of steam. Another runner eased up beside me. "How are we doing on time?" he asked. "1:45.30...I guess we're not gonna come in under two hours." "I was thinking the same thing" he replied. I started to walk. At mile 10 I had found myself gasping for air and still running a full minute per mile slower than I needed to be going. I had failed. I considered walking it in... But that guy was still plugging along. He was going slow but he was still running. "10 seconds" I though to myself. "Then you have to start running again" I decided to make a new goal. 2:04 (Ironically the same goal Ryan Hall had for today's Boston FULL Marathon) and I started running again.

Chanda's goals were flexible and at no point in the race did she feel defeated. I had one goal and the moment I realized I had failed to reach it I was done. Set multiple or flexible goals. If you have a time goal give yourself a backup goal. One that you know you can achieve. That way if something goes wrong (like having to race in a tornado!) you can readjust, refocus and still give it your all.


Lesson #5  Spectatheletes Make All the Difference
It turns out there are two VERY different kinds of spectators at a race. Spectatheletes and gawkers. Spectatheletes are awesome! They are the ones cheering from the side of the road. The people who lie to you and tell you that you look great, your doing well and that your almost there. They yell your name if it's on your bib or shirt and they give you that extra umph to keep pushing yourself past the discomfort and exhaustion. Gawkers are very different. They sit on the side of the road and...well...gawk. They offer no kind words, encouragement or help of any nature. Instead, their eyes pierce you like a laser beam as you run by sucking energy from your muscles and increasing your fatigue. Yesterday was mostly gawkers. I recommend asking around and seeing if you know anyone else who has run that race before. Ask about the race environment and the crowd. To be honest, I'll take a quiet trail with no spectators over crowded streets filled with gawkers any day!

I don't want you to misinterpret this post for something it is not. I'm not whining or complaining about yesterdays race. We had a great time, both feel that we ran great races and are already considering running it again next year. What I am hoping is that you are able to learn from a few of our hard knocks.  Because, like I said earlier, lessons learned the hard way aren't learned better they just hurt more.

Email ThisBlogThis!Share to TwitterShare to FacebookShare to Pinterest
Labels: Running