The last ten days have been some of the most stressful that I can remember in quite some time. For a variety of reasons (which I won't unload on you) Chanda and I have felt weighed down and to be quite honest we could see the effects all the stress was having on our family. We were all frustrated, short tempered and just plain grumpy. But today we decided we were going to have a good day!

After the older kids got out of school Chanda and I announced that we were going to hit the trails. The kids suggested a park called Hudson Springs about 20 miles from our home with a pretty challenging but rather short running trail that also sported a kids play area made up of at least four playground sets, a rock wall, a giant slide and a dozen or so swings. Chanda and I agreed to take turns hanging with the kids while the other ran the trail. After each lap the person running would check in at the playground and if everyone was doing well they could do another lap.

Here in Northeast Ohio we have had more rain in the last 30 days then they have had in Seattle and the whole park was a swamp. "Oh no!" cried my oldest as she looked out the windshield toward the playground, "How are we going to get over there?" 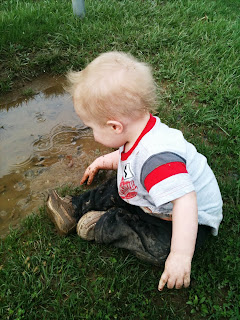 I took a deep breath. "We are going to have a good day." I thought to myself. "We'll just go that way." I said allowed, pointing to a high place that looked like it might be dryer. "It won't be so bad." I was wrong. There was no dry way to get to the playground. Every square inch of that field was swampland. By the time we made it to the first jungle gym the we were all a mess! My four year old son's fairly new running shoes were encased in mud, the girls had somehow managed to get mud up to their knees, our youngest walker (a year and a half old) had already sat in the mud three or four times and both Chanda and I had mud all over our running shoes. We all just stood there looking at each other, surveying the damage.

"What do you want to do?" Chanda asked. I thought about it for a minute. We were all there. Already muddy. There was no way to get back to the van without getting even messier.

She just looked at me. Then without a word she strapped on her watch, grabbed her water bottle and headed into the woods. When she got back the kids were covered in mud from head to toe. They had it in their hair, on their faces and all over their clothes. The trails weren't quite as wet but looking at Chanda's shoes I knew that she had seen mud out there too. Chanda ran her laps and then I ran too and the while the kids got muddier and muddier. We were having a ball!

As we drove home, mud encrusted children dozing in their seats, Chanda sighed, "I think that was just what we needed."

It was. The circumstances that lead to our feeling so stressed are still there but we all walked away from that park with our heads clear. Being outside, playing, running, getting muddy...it was therapeutic. It allowed us to refocus on what was really important, to remember who we are and who is really in control. What we needed was a little mud therapy. And as we drove away I was reminded of a Bible passage at the end of Mathew 6, "But seek first his kingdom and his righteousness and all of these things will be given to you as well. And do not worry about tomorrow, for tomorrow will worry about itself. Each day has enough trouble of it's own." 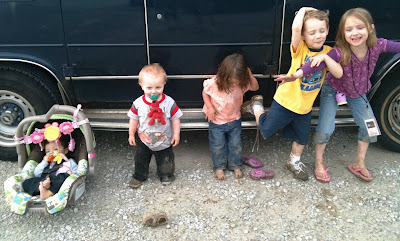